The Stockeld Story – Enchanting the Forest

The first year of the Christmas Adventure surpassed all expectations. Into a converted riding school and onto a new eco-friendly plastic ice rink had come 20,000 visitors, more than anyone could have imagined.

That opening season hadn’t been without its problems, however. Overwhelmed by the sheer scale of it all, the café manageress walked out, without warning, on 5th December – a Friday – one of the busiest days of the season. That day shortened the lives of more than a few who were left on site! With no food to serve and no café manager to lead, crisis was decidedly imminent. The situation was made worse by the departing manager’s decision to empty the kitchen of equipment, taking all her pots and pans with her. With lunchtime a matter of hours away, the marketing manager was dispatched to Ask Pizza in Wetherby to requisition every pizza that could be spared, whilst co-owner Susie Grant headed to Sainsbury’s to empty their shelves of milk and mince. The team survived the day and an agency chef was mercifully found to cover the weekend, whilst a proper contingency plan could be put in place.

So when it came to planning for the Christmas Adventure’s second opening, everyone knew it had to be big. One of the Adventure Park’s greatest assets is its natural environment. Set in a corner of the Stockeld estate, it is surrounded by acres of historic woodland, in the heart of which sits a beautiful lake. Central to the ethos of Stockeld Park is the belief that visitors aren’t coming to a theme park for the rides, but to enjoy different activities within nature. 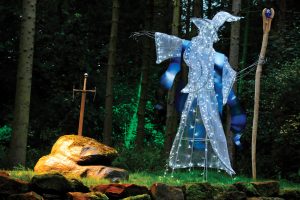 Merlin the wizard in the Enchanted Forest

And so it was that the Enchanted Forest was born. Stockeld Park’s motto is ‘Where Magic is Made and Adventures Begin’. This was the feel Susie and Peter wanted to create with their idea of a meandering forest walk, on which adventurers would discover magical illuminations, creative play and interactive installations.

Lighting the forest in those days was easier said than done, however. It is easy to forget, with so many places now offering spectacular light displays at Christmas, that these displays are a fairly recent phenomenon, and Stockeld Park was one of the pioneers. As part of their research, Peter and Susie had met a gentleman called Chris Thornton, a garden lighting designer in charge of the Christmas lights for the Cadogan Estate in London. He had conceived of the idea of a mistletoe-type light to adorn tree branches and had them made in China, so Stockeld shared with him his very first container load: half came to us, and half went to Sloane Square. 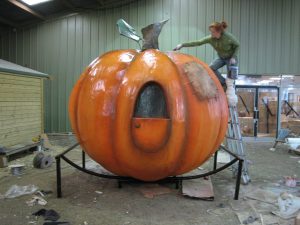 Acquiring the other lights and illuminations required no less a bespoke approach. Finding any sort of forest lighting other than two-dimensional cut-out Bambis proved almost impossible, so Susie set about finding artists to help her realise this part of the dream. Susie had happened across a very talented artist called Clare Palmer having contacted local theatres to find set painters. She in turn introduced Susie to her husband James, a superb joiner, and both continue to work with Stockeld to this day. More introductions duly followed to Gemma Fletcher, a metalworker, and Paul Lazenby who specialised in fibreglass. 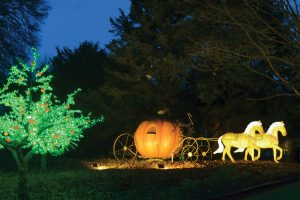 So followed a wonderful summer in 2007, where the team set about designing and building original pieces for the Enchanted Forest, including Rapunzel’s Tower, Merlin the Wizard, the White Witch, Cinderella’s Pumpkin Coach, Grandma’s Cottage, and the Angels in the Lake. Dozens more pieces were to follow as the years progressed, but this was where it all began.

One other original idea was the creation of creatures and fairytale characters made from wire. Susie managed to find a sculptor in wire called Barry Sykes, who was based down in Lewisham in London and who made wire cats and dogs for people’s gardens. Presently he found himself commissioned to make rather bigger cats and dogs, in the form of a life-sized lion and a pack of wolves, together with sheep, unicorns and ultimately a dragon! A van was dispatched to the capital to collect them, but with their installation in the forest came the problem of how best to light them. All were at a loss, until Laurence, Peter’s youngest son who was studying drama at Goldsmith’s University at the time, had the idea of using different colours of UV paint and bathing them in UV light, which worked brilliantly and still does to this day.

Installation of everything was a family affair. Henry, Susie’s son, was at home for the summer from Edinburgh University, and together with his best friend Robin Taylor, set about installing all the forest lights. Night after night they wired extension plugs, miles and miles of it, and in the day they balanced in the bucket of a JCB and cherry-picker to put in all sorts of infrastructure still in use today. Laurence also came home and assisted digging trenches, operating machinery and hammering countless posts, as well as creating two fictional co-workers, ‘Carl Reef’ and ‘Horace Papplethwaite’ with whom to irritate and amuse his family and colleagues by describing their predicaments in a series of arresting situations down the radio at all hours of the day. Peter’s eldest son, George, had been away at a language school in the south of France for most of the summer, but returned in time to assume the role of ‘Mr Office’, tasked with recruiting the small army of Gap Year students and school-leavers needed to staff the new Adventure, promising young whipper-snappers flexible working hours and conditions that went right out the window when things really started! 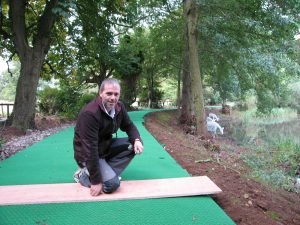 But that wasn’t all. Peter had seen how popular the skating rink had proved in the first year, and he wanted to create something truly unique that people would want to master and return to. An avid skier, Peter had a cross-country skiing machine in his bathroom and so hit upon the idea of creating a cross-country ski trail to run alongside the foot-trail through the Enchanted Forest. He found a toboggan carpet and conceived of the notion of irrigating it from the lake, to reduce friction and enable skiers to slide along. And so it was that the Farm Manager Geoff Marston and his team made not one but two tracks through the forest, one for walking and one for skiing! A fitter from Calverts Carpets came to lay the carpet, and Susie recalls looking on as this carpet was being laid in a wood and thinking “this is crazy; it will never last!” But last it did, and still does. At 1.2 kilometres, it is three times the length of any other synthetic ski trail in the United Kingdom, and believed to be the longest in Europe.

Unfortunately, as the team at Stockeld were merrily creating their own fantasy world, they were rudely interrupted by the unromantic and unfeeling fellows that occupy the planning department at Harrogate Borough Council. Officers seemed to think the Park had taken things a little too far! Peter and Susie were duly hauled over the coals, and things looked fairly gloomy for a while, with officers recommending refusal, which would have terminated the Adventure at birth. Peter was not to be defeated, however, and insisted the case go before the planning committee in open session. Councillors were duly lobbied, and Peter was afforded the opportunity to stand and make an impassioned case, the result of which was a unanimous verdict in favour of allowing the Adventure to continue.

And so, in spite of that near scrape, the second Christmas Adventure opened as planned. This time the numbers who came to see the lights and enjoy the new creations doubled on the previous year. In 2007 some 43,000 people turned up.

The journey around the outer ring of the Playhive, which will house...
26th November

Wind speeds are now predicted to reach or exceed 70 miles per...
6th July

Firstly, we are pleased to confirm that we have successfully applied for...

Join us for our brand new panto this February half term, Saving Farmer Foster's!
19-27 February
Included! *

Clamber and climb up high like a monkey in this Adventure Playground!
19-27 February
Included! *

Invade the Teepee Encampment, an imaginative adventure playground for all ages!
19-27 February
Included! *

Step into the magical world of the Enchanted Forest and discover hidden adventure play amongst acres of ancient woodland!
19-27 February
Included! *

Where our magical animal statues come to life!
19-27 February
Included! *

Our farm themed playground is perfect for little ones!
19-27 February
Included! *