The circus is coming to Stockeld for the May half term! Join us for a week of family adventures and jubilee celebrations!
Book your tickets here
Stockeld Park
Today at Stockeld Park:

The Stockeld Story – The Maze

Perhaps the most iconic installation at Stockeld Park is the Maze.

Viewed from above, the Maze is a spectacle to behold. More than two miles of paths wend their way to form a gigantic snowflake lined with eight-foot hedges which, after dark, come alight with thousand upon thousands of twinkling lights. The Maze has been used in countless images promoting the Park, in newspaper articles, as the scene for a televised wedding (Don’t Tell the Bride!), and most recently as the image representing Stockeld on the board of the new Harrogate Monopoly.

The Maze first opened to the public in 2007, but work on the project began long before that. The original inspiration was a visit to Hampton Court Palace in London by co-owners Peter and Susie Grant and their youngest daughter Phoebe. The maze at Hampton Court is the oldest surviving hedge maze in the UK, commissioned in 1700 by King William III, and this was what inspired Peter to build his own here at Stockeld Park. 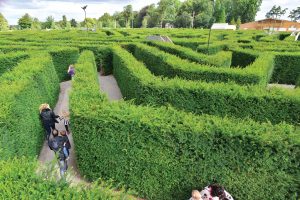 Amongst his many skills, Peter is a talented self-taught graphic designer. Over many years managing the farms and estate at Stockeld, Peter had learned how efficient computer mapping can be for calculating distances and configuring spaces and brought these same principles to bear when it came to designing the maze. Having learned how to manipulate ordinance survey maps on computer, Peter had also taught himself how to use the surveyor’s tool the Total Station, to enable him to accurately plot and design a landscape.

But what to use to actually build the Maze? The answer presented itself from one of Stockeld’s less successful schemes.  A few years earlier, Peter had branched out into the box and yew tree business, hoping to compliment the existing Christmas tree operation. The venture never quite caught on as hoped, but for every cloud there is a silver lining, and it was the failure of this project that provided Peter with just the raw materials for his next big idea.

To make the Maze a reality Peter teamed-up with one of the world’s leading maze designers, Adrian Fisher, who has created more than 700 mazes across 36 countries on six continents. Peter commissioned Adrian to come up with a Christmas-themed design, and so it was that the Snowflake Maze was born. With the design ready, now came the task of creating it. Using the OS mapping and Total Station, the snowflake was carefully plotted out to the last millimetre on what was then the paddock in front of what was then the old riding school. 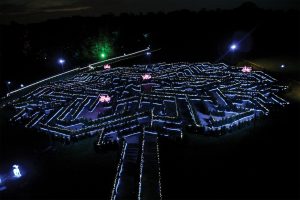 Next came the challenge of transplanting the yew trees that were to be used to make the Maze hedges. Over long experience in horticulture and agriculture, Peter and Susie had learned the importance of proper digging, manure, and irrigation. For an installation of this size, a hosepipe simply would not do! And so it was that trenches were dug and irrigation pipes meticulously laid. More than 2,000 young yew trees were then bare root transplanted, with just one being lost.

To add extra complexity to the Maze and to complement the Christmas theme, 12 gates were added within the Maze, each based on a different day from the 12 Days of Christmas, which could be opened and closed at intervals to alter the routes available to the centre. 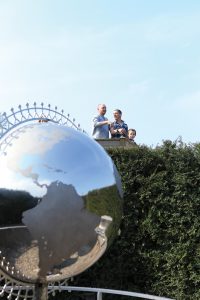 As hoped, the Maze proved an instant success upon its opening in 2007, which also saw the opening of the Enchanted Forest for the first time. In subsequent years, Stockeld has added to the Maze considerably, with new installations to enhance to the experience, including a huge tower, two Tardis’s through which guests can communicate with each other from different points, the Honkey Tonk Saloon, the Globe at centre and much else besides.

In the 12 seasons since it opened, well over one million people have found their way to the Maze’s centre, or got lost trying. It is amongst the finest mazes in the land, and one of our proudest creations.

The Easter bunny is coming out of hiding, down to Stockeld Park...
14th March

One of England’s leading adventure parks is donating £10,000 from tickets sold...

It's time for some bubble fun at the Weekend Adventures!
30th April- 17th July (during weekend openings)
Included! *

Clamber and climb up high like a monkey in this Adventure Playground!
30th April-17th July (Weekends & bank hol) *
Included! *

Saving Farmer Foster's is back for the Weekend Adventures!
30 Apr - 22 May
Included! *