The Stockeld Story – The Fountain in the Lake

This is the final post in our History of Stockeld Park series, and it tells the story of the magical Fountain in the Lake, which now forms the centrepiece of the Winter Illuminations in our Enchanted Forest.

The Fountain is a comparatively recent addition to Stockeld, having been installed only in 2016, a full 10 years after the Park first opened its doors. The ambition for a musical light show on the lake, with a fountain at its centre, had long been held by owners Peter and Susie Grant, but the issue had always been one of cost. Finally, in 2016, Peter managed to locate a sufficiently competitive supplier and the decision was made to take the plunge, quite literally as it turned out!

Once the fountain arrived on site in September, there came the not inconsiderable question of how to actually get it into the lake through several acres of dense woodland. Assembly in the water would have been exceptionally challenging, and so the decision was taken to build the fountain on the grass field and transport it as a single piece into the middle of the forest.

By helicopter, that’s how! 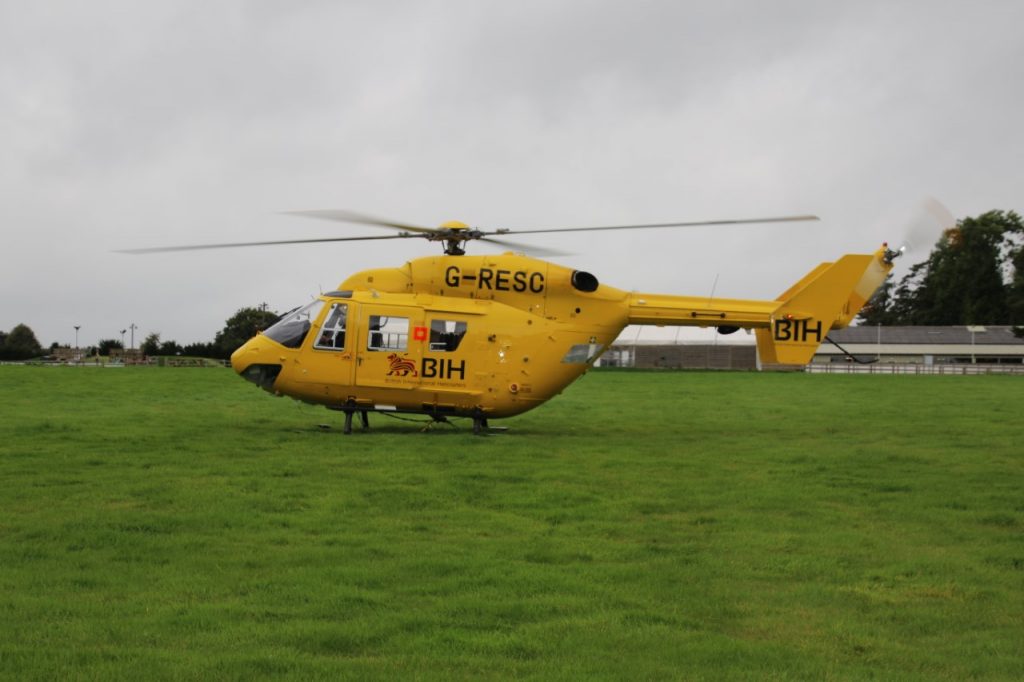 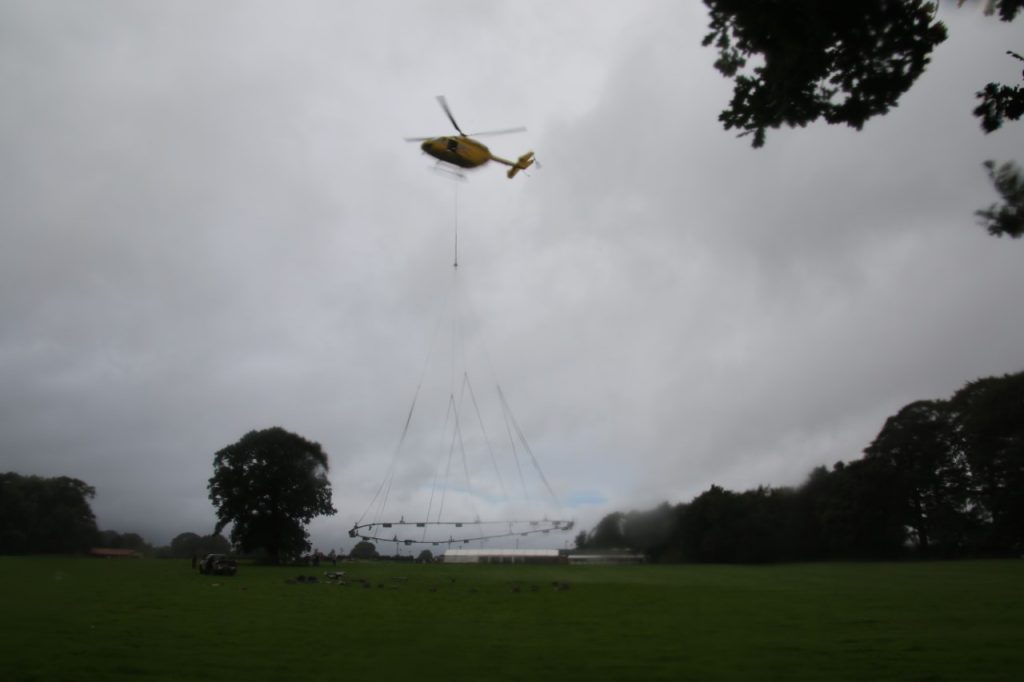 Peter contacted a firm called British International Helicopters based in Warwickshire, whilst Stockeld Technical and Site Manager Ben Locke led the construction of the fountain ahead of transport. Matters were made harder still by a period of relentless, driving rain, which repeatedly pushed back the install date until delay could occur no longer, and in spite of the downpour, the helicopter came.

As it was, the airlift into the lake took place without incident and all hailed a great job well done. But then came even the bigger problem of making the fountain work!

Unfortunately for everybody, the instruction manual was written in a language nobody could understand, and nor could any of the technicians from the company that sold it speak much English. The issue was not simply how to make the fountain shoot water, but how to integrate the fountain and its many nozzles to a digital music and light display.

As Ben recalls, “working with water and intelligent lighting controls is not an easy task! We had pumps that stopped working, pipe work that split, controls that stopped sending data to the pumps, lighting that flickered every time the pumps went to full power, and these were just some of the early issues we encountered!”

Nearly as challenging was timing the water to ‘dance’ to music. The first transposition was written by Peter’s eldest son George, now Stockeld’s Estate Manager, who prepared a score more than 13,000 entries long on Excel, with each of the fountain’s 13 nozzles receiving just over 1,000 individual instructions for when and how long to shoot water, and in which colour. The difficulty came with the ‘lag’ between an instruction being received and water leaving the fountain, which even when just a fraction of a second was enough to throw the whole thing off. In the event it took two full years to perfect the music and light display and get the timing just right.

And it wasn’t just the fountain that had its problems. As everyone knows, water is one of the biggest enemies of electrical equipment, and surrounding the fountain are all the lights that also form part of the show. Whilst the fountain itself stays in place year-round, the lights, together with many of the underwater cables, are uninstalled and moved into safe storage at the end of each winter, only to be reinstalled ahead of the following season.

“One of my favourite jobs is getting my dry suit on and hammering all of the posts into the bottom of the lake that we then attach floating pontoons onto,” says Ben. “All of our equipment is specially made to stop water getting in but sometimes this doesn’t work quite as well as it should, so we often find ourselves with our head torches on in the dark on a December evening trying to work out which light is faulty. But it’s all in a day’s work at Stockeld Park.”

Today, the fountain is a source of immense pride for all the team at Stockeld Park, and when it is dancing to music and light on a clear winter’s evening it truly is a wonder to behold. We do hope you will be able to come and share the wonder with us again before long…

The journey around the outer ring of the Playhive, which will house...
26th November

Wind speeds are now predicted to reach or exceed 70 miles per...
6th July

Firstly, we are pleased to confirm that we have successfully applied for...

Clamber and climb up high like a monkey in this Adventure Playground!
19-27 February
Included! *

Invade the Teepee Encampment, an imaginative adventure playground for all ages!
19-27 February
Included! *

Our farm themed playground is perfect for little ones!
19-27 February
Included! *

Where our magical animal statues come to life!
19-27 February
Included! *

Join us for our brand new panto this February half term, Saving Farmer Foster's!
19-27 February
Included! *

Step into the magical world of the Enchanted Forest and discover hidden adventure play amongst acres of ancient woodland!
19-27 February